Many people who want to change their weight under-eat for a while. This is commonly known as “dieting”. Under-eating for a short while in someone who is broadly a healthy weight will do little damage, but for some people under-eating becomes a way of life. 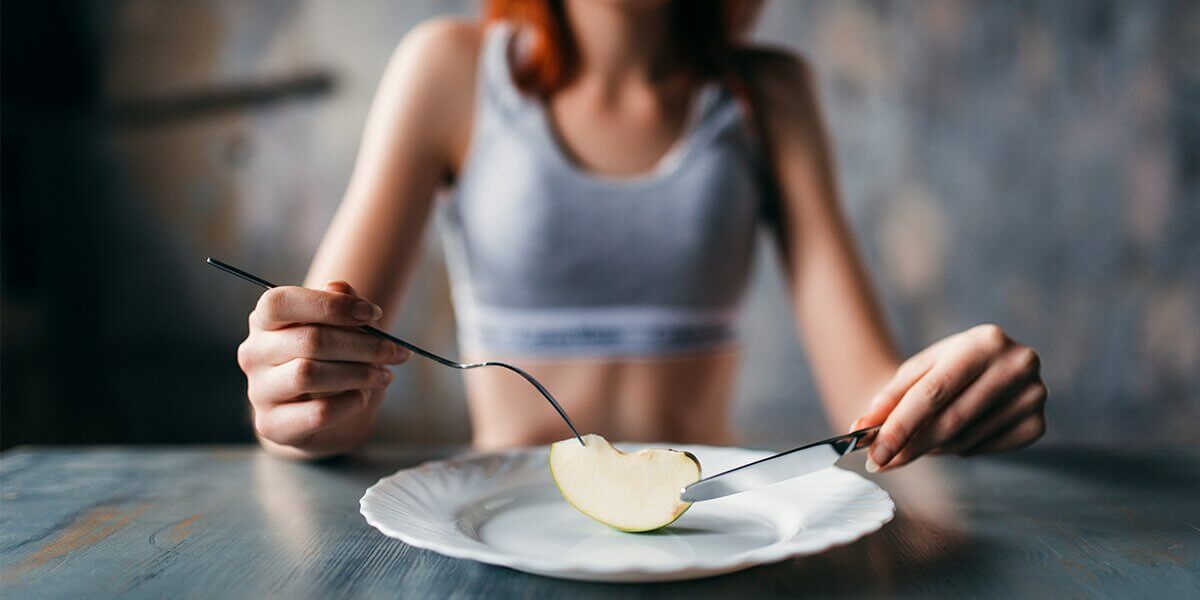 Many people who want to change their weight under-eat for a while. This is commonly known as “dieting”.  Under-eating for a short while in someone who is broadly a healthy weight does little damage, but for some people under-eating becomes a way of life. Under-eating can take many forms;

Both overeating and under-eating for a long period of time have serious effects. Knowledge about the effects of under-eating and underweight have come from many sources, such as studies of the effects of famine and concentration camp victims, as well as research studies into the effects of food restraint in animals and humans. Consistent findings have emerged. This means that whatever reasons you have for restricting food, you would experience the same adverse effects no matter what you weigh. In her book Sick Enough, The Medical Complications of Under-Eating, Dr Gaudiani describes how the cave-person brain works to help us live. This is the part of our brain that runs aspects of our physiology which is out of our control; our metabolism, heart, temperature regulation, heart rate, digestion and hormones. This part of our brain has evolved to help us survive common famine conditions that our ancestors had to cope with. Starvation can mean a lot of things, not just having insufficient calories. Starvation can include deficiencies in minerals, protein and the fats which our brain uses to function properly. Most of us get our needs met over time, we don’t have to eat a perfect diet every day because much of what sustains us is held in reserve. But the stores can run dry in just a few days. This will make the cave-brain kick into action to save us. The cave-brain response differs from one person to another. But the common ways that the brain tries to conserve energy and vital nutrients will cause very predictable physical sensations such as chilliness, restlessness, cold hands and feet, poor skin, slowed digestion and digestive pains, slowed heart rate, reduction in essential hormones and poor metabolism. This has a big effect on our emotional well-being, how we feel and how we think.

The effects above are the result of sustained under-eating and can occur in someone of any weight, but if weight is also very low the effects of under-eating are greatly increased. Under-eating has specific effects which are universal, and which change every aspect of personality.  Some distressing symptoms when a person tries to eat more are directly caused by under-eating. Example: being bloated is caused by under-eating and is not usually a sign that you have eaten too much. Your personality, thoughts and feelings are directly affected by what you eat. The effects of under-eating are dangerous. Under-eating may make you feel special and stronger, but this is the eating disorder telling you that this is so, and this eating disorder also makes you unhappy and tired. Under-eating will keep someone locked in to the eating problem by making you more obsessed and preoccupied by food and more irrational about how you really look, more inflexible and more easily bloated. All these horrible symptoms – including self-hatred and feeling fat, will begin to recede if you are able to start eating and regain a healthier body weight. If weight is already low, you may need some expert support to help you manage this change and keep you safe.   Adapted from Fairburn, CG, Cognitive Behaviour Therapy & Eating Disorders Guildford Press 2008 and Sick Enough, A Guide to the Medical Complications of Eating Disorders. J. Gaudiani. Routledge 2018